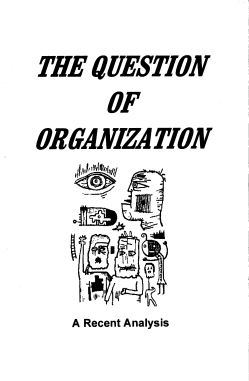 Originally published in the magazine Insurrection, a project which included Jean Weir, this zine offers an analysis of several facets of an insurrectionist perspective on organization. Sections include: beyond the structure of synthesis, informal organization autonomous base nucleus, and the affinity group.

“At the two ends of the spectrum we find on the one hand the individualists who refuse any kind of stable relationship; on the other those who support a permanent organization which acts on a program established at the moment of its constitution. Both of the forms sketched out here have characteristics that are criticizable from a insurrectional point of view.”