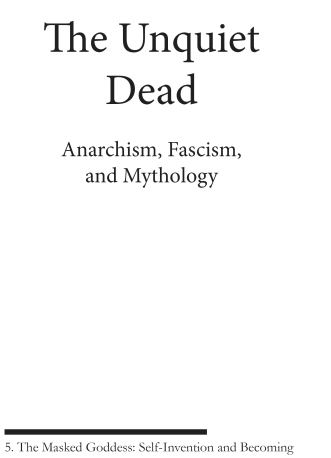 Chapter five of this multipart series discusses strategies for self-invention and becoming in the work of Gloria Anzaldúa, Audre Lorde and Saidiya Hartman; the struggle for access to Native spirituality practices in Canadian prisons and the pitfalls of ally politics; response to calls for oppressed nationalisms and essentialism practiced by people of color. The full text is available at unquietdead.tumblr.com; we will be posting recordings of other chapters in the future.

“If identity is only a game, if it is only a procedure to have relations, social and sexual-pleasure relationships that create new friendships, it is useful. But if identity becomes the problem of sexual existence, and if people think that they have to “uncover” their “own identity,” and that their own identity has to become the law, the principle, the code of their existence; if the perennial question they ask is “Does this thing conform to my identity?“ then, I think, they will turn back to a kind of ethics very close to the old heterosexual virility. If we are asked to relate to the question of identity, it must be an identity to our unique selves. But the relationships we have to have with ourselves are not ones of identity, rather, they must be relationships of differentiation, of creation, of innovation.”