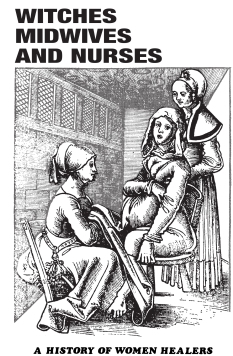 Women have always been healers, and medicine has always been an arena of struggle between female practitioners and male professionals. This audio zine explores two important phases in the male takeover of health care: the suppression of witches in medieval Europe and the rise of the male medical profession in the United States. The authors conclude that despite efforts to exclude them, the resurgence of women as healers should be a long-range goal of the women’s movement.
Originally published in 1973, this text offers a good brief analysis of the history of patriarchy as it relates to the medical establishment. However, it has some blind spots around Eurocentrism and intersectionality.
Musical Interludes – Stevie Nicks – Gate and Garden

Bibliography (not included in AudioZine)

-The Manufacture of Madness, by Thomas Szasz, M.D., Delta
Books, 1971. Szasz asserts that institutional phychiatry is the
modern version of the witch-hunts, with the patient in the role of
the witch. We are indebted to him for first presenting witchcraft in
the context of the struggle between professionals and lay healers.
See especially the chapter on “The Witch as Healer.”
-Satanism and Witchcraft, by Jules Michelet. The Citadel Press,
1939. A mid-nineteenth century work by a famous French
historian. A vivid book on the Middle Ages, superstition and the
Church, with a discussion of “satan as physician.”
-The Malleus Maleficarum, by Heinrich Kramer and James
Sprenger, translated by Rev. Montague Summers. The Pushkin
Press, London, 1928. Difficult medieval writing, but by far the best
source for the day-to-day operations of the witch-hunts, and for
insights into the mentality of the witch-hunter.
-The History of Witchcraft and Demonology, by Rev. Montague
Summers. University Books, New York, 1956. Written in the 1920’s
by a Catholic priest and defender-really! -of the witch-hunts.
Attacks the witch as “heretic,” “anarchist,” and “bawd.”
Witchcraft, by Pennethrone Hughes. Penguin Books, 1952. A
general introduction and survey.
-Women Healers in Medieval Life and Literature, by Muriel Joy
Hughes. Books for Libraries Press, Freeport, New York, 1943. A
conservatively written book, with good information on the state of
academic medicine and on women lay doctors and midwives.
Unfortunately, it dismisses the whole question of witchcraft.
The Witch-Cult in Western Europe, by Margaret Alice Murray.
Oxford University Press, 1921. Dr. Murray was the first person to
present the anthropological view, now widely accepted, that
witchcraft represented, in part, the survival among the people of a
pre-Christian religion.
-A Mirror of Witchcraft, by Christina Hole. Chatto and Windus,
London, 1957. A source-book of extracts from trial reports and
other writings, mostly from English witch trials of the 16th and 17th
centuries.
-The Formation of the American Medical Profession: The Role of
Institutions, 1780-1860, by Joseph Kett. Yale University Press,
1968. Conservative point of view, but full of scattered information
on lay healers. He discusses the politically radical nature of the
-Popular Health Movement in Chapter Four.
Medicine in Americe: Historical Essays, by Richard H. Shryock.
, Johns Hopkins Press, 1966. A readable, wide-ranging and fairly
liberal book. See especially the chapters on “Women in American
-Medicine” and The Popular Health Movement.”
American Medicine and the Public Interest, by Rosemary Stevens.
Yale University Press 1971. Long and dry, but useful for the early
chapters on the formation of the American medical profession and
the role of the foundations.
-Medical Education in the US and Canada, by Abraham Flexner,
Carnegie Foundation, 1910. (Available from University
Microfilms,Ltd., Ann Arbor.) The famous “Flexner Report” that
changed the face of American medical education. Some
reasonable proposals, but amazing elitism, racism and sexism.
-The History of Nursing, by Richard Shryock. N.B. Saunders, 1959.
Better-than most nursing histories-which are usually glorifications
of nursing by nursing educators-but much worse than Shyrock’s
medical histories.
-Lonely Crusader: The Life of Florence Nightingale, by Cecil
Woodham-Smith. McGraw Hill, 1951. A richly detailed biography
which puts nursing in the context of the oppression of upper class
Victorian women.
-Glances and Glimpses, by Harriet K. Hunt. Source Book Press,
1970. Rambling autobiography of a feminist and “irregular”
woman doctor of the mid-19th century. It’s useful for its
descriptions of the state of medical practice at the time.
-“The American Midwife Controversy: A Crisis of
Professionalization,” by Frances E. Kobrin. Bulletin of the History
of Medicine, July-August 1966, p. 350. Restrained and scholarly
account of the outlawing of American midwives. Very worthwhile
reading.