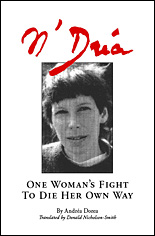 “Andrea (N’Drea) was involved with Os Cangaceiros, a group of social rebels who refused the slavery of work and mercilessly attacked the prison system of France in the 1980’s and 90’s. In 1985, she learned that she had cancer.
She underwent surgery, chemotherapy and radiation treatment. Then in 1990, she walked out of the medical world for good to grasp her life and her death as her own.
This work explains that decision with intelligence, anger and joy. It is at
the same time a powerful condemnation of the medical industry, a passionate theoretical analysis of the society of the commodity and its destruction of the human individual on all levels—emotional, intellectual, social and physical—and the personal expression of one woman’s decision to live her life fully and to die on her own terms among those she loved in defiance of a society that steals both our lives and deaths away.”
—Wolfi Landstreicher